Leaking moonroof poll, what year is your Alltrack?

For those who has experienced a leaking moonroof, what year is your Alltrack?

I would encourage everyone who has has a sunroof leak to report it to NHTSA as a safety issue.
The safety issue for me being the windshield fogs up excessively, when it rains and can't see out the window(s) and windshield clearly.

Mine was built in late 2016, but the 2017 model. The dealer tells me it's a leaking sunroof, though I'm not positive it is (haven't seen any water leaking around the roof, only in the spare wheel area)
J

Mine was a 17 never leaked just had too many other issues with it so I traded it on on a 18 R.

2017. Bought new in 6/2018 in Bakersfield, CA. Didn’t leak until November of 2019. Then it was a freaking waterfall. Ancira VW here in San Antonio was awesome and went to bat to set it straight. Performed the drain tube repair/modification, replaced the headliner, and offered to replace any electronics that may have been affected by the moisture, with no expiration on the offer. Also provided me with a loaner while the headliner was being replaced (about two business days, but there was a weekend between). In the end, I couldn’t have been more comfortable with what could have been a majorly stressful process.

This showed up in my mailbox the other day... 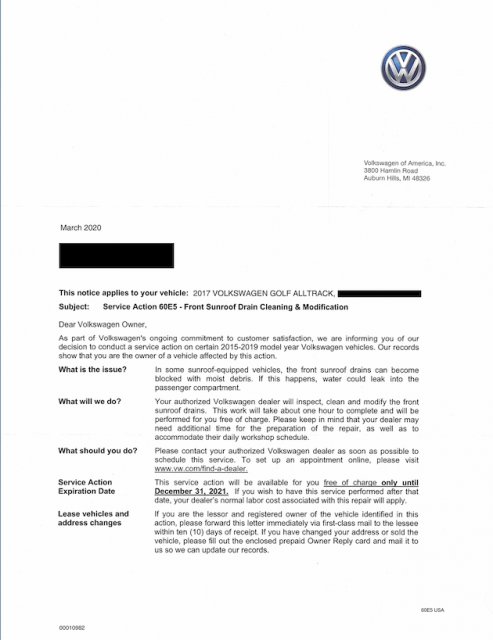 Nokian said:
'17 NO leak.
Click to expand...
Same here '17, Luckly mine doesn't leak although I'm aware of the issue and park under covered parking at work and garage at home although the first 2 years I didn't park in garage and it rains a lot here in Washington. One issue though is during the summer running A/C and at night when it's cooler and A/C is off, if I don't have fan turned up and blowing mainly tru defrost (W/warm air) sometimes my windshield will fog up which is very annoying (not anything like a leaking S/R though) . I got 'service bulletin" about S/R drains recently and having that (fix) right now , I was told by service rep they cut drain hose at angle which supposedly helps prevent blockages? We'll see. Either I'm lucky or it's just a matter of time. This is a major issue though and VW should have #1. designed a better roof/drain system #2. Stop denying owners with this issue, and man up to their faults. Stuff like this (and diesel gate, and carbon build-up on valves, and, sound system disconnect issues and,and,and) have made me lose faith in this company.
Sad thing because I've exclusively owned either VW's or Audi's since 1975 and you'd have thought the sunroof issue would have been solved in this day and age.
N

2017..Had it fixed once in 2018 and now it's gone again. Dealership says it's out of warranty. Off the record told me to contact VW and ask them to pay for it. Is this an insurance claim or should I push VW HQ to fix this? This is really annoying. I didn't realize it had been leaking but did notice a terrible smell. Looked at the spare tire hub and it was full of water. So the drains haven't been draining properly.
You must log in or register to reply here.
Share: Facebook Twitter Google+ Reddit Pinterest Tumblr WhatsApp Email Link