Picked up one of the last ones

Picked up one of the last 2019 golf S6 speed they had at the dealer… Got a smoking deal 24000out the door tax title and license! I’ve had Japanese cars the last 10 years and forgot what a proper Volkswagen felt like! 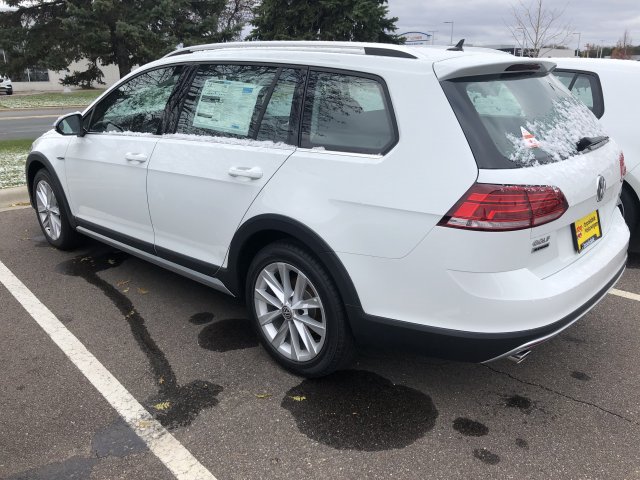 What I Drive
2019 Golf Alltrack SE

Mygolfwgn said:
I can’t find anything I don’t like! All the videos I watched on YouTube reviews people love this wagon! 6year 72,000 mile warranty on Euro car unheard of! Dealer told me they were going to 4 year 50,000 in 2020
Click to expand...
Actually, that makes me nervous. After only two years of 6 year/100K mile OEM warranty, VW is cutting back to a 4 year 50K mile OEM warranty. I am afraid that is a reflection of what their repair records are showing! VW is pitching it as still better than their competition but that is a bit deceiving. Most standard car companies offer a three year 36K complete OEM warranty but add in a 5 year powertrain warranty. VW doesn't mention that its new warranty doesn't do that.

I agree with you about the car. I loved the test drive and the only slightly raised elevation. Both Car & Driver and Consumer Reports loved the car. That might be a first. However.....

VW has a very iffy reliability record. I bought my Alltrack for my daughter but if it didn't have the six year warranty, I wouldn't have bought it (the alternative was a Mazda CX-5). VW makes great cars when they work but that is a big "when".
OP

I think that was put in after dieselgate To bring people back in the show rooms and it’s probably costing them plenty!! I was tired of boring Japanese cars that I’ve been driving the last 10 years,,, I know oil changes are going to cost me more as well as everything associated! I Have owned Audis and Volvos and VW in the past there is just a feel you get that you can’t get with the Japanese car! This thing is tight...I am liking the feel of the all wheel drive!
S

Mygolfwgn said:
I think that was put in after dieselgate To bring people back in the show rooms and it’s probably costing them plenty!! I was tired of boring Japanese cars that I’ve been driving the last 10 years,,, I know oil changes are going to cost me more as well as everything associated! I Have owned Audis and Volvos and VW in the past there is just a feel you get that you can’t get with the Japanese car! This thing is tight...I am liking the feel of the all wheel drive!
Click to expand...
Exactly my point. If their cars were reliable like Toyotas, it wouldn't be costing them plenty, especially in the first couple of years which would have been covered under the more limited warranty anyway. So...not a good sign.

It is a shame because, aside from reliability, VW makes a really nice car.

Steve well said. VW must have reevaluated their warranty and decided on a cheaper path for VW. Which is bad for us consumers. But remember just over ten years ago their warranty was only 2/24. So I think they have come a long way and gotten better in reliability but still not as good as any Toyota, Subaru or Honda. My first 2017 VW Alltrack had numerous Pano leaks, electrical problems, suspension noise, vibration/tire issues, transmission whine, gas cap not properly attached and fell off, and car mat attachment points bent at floor. I knew going into my first VW it may have some reliability issues I thought the dealer and/or I could fix anything. But the leaks couldn't be fixed. Luckily VW with nudging by my State's attorney's office and the lemon law, VW replaced my car with a new 2019 with much less problems....I love the way my Alltrack drives, when it is 100% trouble free.
Last edited: Nov 18, 2019

Also in the past year while my 2017 was in for those repairs I got a chance to drive 6 different Golfs, and Alltracks. Some of the same electrical, suspension and tire problems were also on the loaners I drove. That tells me there is a reliability issue.
S

What I find intriguing is that VW knows how to make a reliable vehicle. Audis are very reliable.
O

I picked up my green SE two days ago. When it had 40 miles on it, my sister backed a car into it, causing $1300 damage to the front bumper. GRRRR....gotta get it fixed.

I really like this car; it's lively, the stick shift--last of a dying breed--is wonderful, the seats are comfy, and surprisingly (because I didn't listen to it during the test drive) the entertainment system is superior to any other OEM system I have ever had, and at 68 years of age, I've had a lot of them. And the handling is superior--the car does not break traction even in a sharp turn on wet pavement.

Android Auto, however, sucks, which isn't really VW's fault. And because the car doesn't have built-in nav and relies on Google maps for nav, if I ever take it to the boonies, I'll take my Garmin, which doesn't need cell towers to operate.

Speaking of boonies, I don't see any AT or semi-AT tires for this vehicle on Tirerack--which is strange because this vehicle is supposed to be competition for the Outback, no? Last time I took a vehicle with OEM street tires to the Gila National Forest in New Mexico , a cactus put a needle clean through the sidewall. Gotta figure that one out.
Last edited: Nov 26, 2019
You must log in or register to reply here.
Share: Facebook Twitter Google+ Reddit Pinterest Tumblr WhatsApp Email Link